This is the first in a series of Member Spotlights we are presenting to help our members stay more connected with each other during this time when we cannot meet in person.

At first glance, Richard Eliot Towle’s life seems to be bookended by photography and railroading.  On closer examination, his story also is bookmarked by family and friends and by public service and safety.  His devotion to the railroad in his service to the Town of Manchester (now Manchester-by-the-Sea), the Federal Railroad Administration, and Operation Lifesaver makes him the ideal first member in the “Spotlight.”

First, everyone calls him “Dick,” the exception being his mother when young Richard was in hot water.  Growing up, he enjoyed his father’s basement railroad.  Dick has his own too, perhaps making it a family tradition. (His son Rick followed him into railroading and works as a communications technician for Keolis.) His interest in railroading was not diminished by his experience as a commuter on a train in the February 22, 1956 collision in Swampscott. 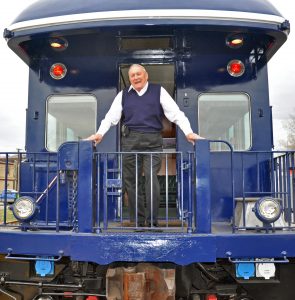 Dick Towle Aboard the Pan Am Railways OCS

Dick’s longstanding interest in photography led him to the Franklin Institute of Technology.  Before graduating with an associate degree, he hired on with the Boston Terminal Company.  He worked as an operator at  Tower 1 at South Station. He spent a couple of years in this demanding job before finding an opportunity closer to home.

He had begun his service of 43 years with the Town of Manchester as an on-call firefighter and photographer while at Boston Terminal.  Now Dick joined the police and fire departments, graduating from the police academy and fire school.  He continued using his photography skills for the Town, documenting accidents.

One accident he documented was the August 11, 1981, fatal train collision at Prides Crossing.  Dick took many photographs in the case, which reinforced his interest in railroading.   The experience led to his initial Operation Lifesaver (OL) involvement.

Dick’s role as a police photographer was growing.  As a Licensed Police Crash Investigator, he also documented crash scenes for the Registry of Motor Vehicles across Northeastern Massachusetts.

He maintained his interest in railroading. He had been friends with Vincent R. “Vin” Terrill for years.  Vin was vice-president of engineering for the Boston & Maine, President of the Railroad Club, and industry icon. He asked Dick to photograph the Hoosac Tunnel  – “brick by brick.”  Dick photographed the entire historic engineering feat over about ten days, working from the West Portal in North Adams, MA, almost five miles to the East Portal in Florida, MA.

On another occasion, his friend, PanAm Safety Director Dave Nagy, arranged for Dick to join David A. Fink on an inspection from Ayer to Portland in the Railroad’s business car.  The photos seen here are from that trip. Dick praises Dave Nagy and David A. Fink for Pan AM’s excellent support of OL.

In March 2003, Dick was preparing to retire from the Town. Vin suggested he consider FRA.  Grateful for his friend’s advice, he accepted an unusual job at FRA.  He was one of a few staff who made safety presentations to stakeholder groups. He worked for Janet Lee, Region 1 Deputy Administrator.  He praises Janet as “ . . . a railroader and a huge inspiration.”

He joined the New England Railroad Club around that time, as his work began to grow beyond Region 1.  Janet asked him to travel to Orlando, FL, to address the National Association of Chiefs of Police. This led to a nationwide tour as FRA Region 1 Law Enforcement Liaison.

As an Operation Lifesaver Trainer, he traveled from Presque Isle Maine to Albany, New York, training more than 20,000 people.  He was away from home a lot, and he is grateful for the patience and support of his wife of 30 years, Diane.

In 2012,  Dick led the establishment of the New England Rail Safety Exercise (NERSE) that provided agencies with training. NERSE trained about 1,200 people across New England.  PanAm, Amtrak, and P&W supported these full-scale drills with staff and equipment.

Dick often thanks his friends and mentors for his accomplishments: Vin Terrill, Janet Lee, Stu Park, and Al Goff. When he left FRA  in 2016, Al connected him to the opportunity to provide OL training for projects, including the Fitchburg Line, Knowledge Corridor, and Housatonic Railroad.

Dick retired on September 30, 2019.  Reviewing his diverse career, he observes, “Some of the nicest people in the world I have met were fellow railroaders,  just nice folks who made things happen, just good friends who are helping me out now . . .  I am grateful for . . .  a wonderful career and  a wonderful way to go through life.”