Sign up for a tee time or sponsor a hole! Click here to find out more and download pdf forms. Information about the Annual Meeting dinner will be forthcoming.

The following new members were voted into the Club by the Executive Committee at the March meeting:

We welcome our new members!

Despite a rainy day the Expo once again was the gathering point for the region’s rail industry. Lean more about the day’s events in the Expo section.

At the January meeting the Board of Directors voted to award six $1500 scholarships to eligible applicants that are the children, grandchildren, or spouses of New England Railroad Club members in good standing. The awards will be presented at the Annual Meeting in May. Please visit our Scholarship page for more information and an application download. 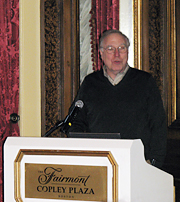 The New England Railroad Club was pleased to welcome Mr. Bennett Levin, CEO of the Juniata Terminal Company, as the guest speaker at our new seminar and reception format January meeting. President Charles Hunter kicked off the afternoon’s event by introducing Mr. Levin to a group of about 60 Club members at the Copley Fairmont Hotel in downtown Boston. Bennett then spoke to us on two topics have been very influential in portraying a positive image of the rail industry.

The first of these was his work planning, coordinating, and operating the “Liberty Limited”, a special train which transported injured servicemen and women from Walter Reed Hospital to the Army/Navy football game in Philadelphia. The train was a way of saying “thank you” for their service and sacrifice, and provided a day away from the hospital travelling in the kind of style and elegance that railroads were known for in the streamliner era. Mr. Levin remarked that he considered the operation of the train to be one of the best things he has ever done in life. To pull off the event Bennett was able to gather support from throughout the industry. Private car owners volunteered their equipment to make up the 17 car consist. The AAR underwrote the cost of the game tickets. Multiple corporate sponsors provided everything from blankets to food. Amtrak had two-track at Union Station for the train, and pilot engineers for the Northeast Corridor operations. Conrail Shared Assets serviced the train while the game was underway. And railroaders from all trades put their names on lists for a chance to be part of the train crew.

The second part of Mr. Levin’s speech focused on his efforts to restore two EMD E8 locomotives, classic units from a time when rail was the only way to travel, to historically accurate, fully operational, condition. After thousands of hours of labor and the custom machining of parts long out-of-stock, the two units have become ambassadors of the industry, pulling special excursion trains (including the Liberty Limited) to such places as Horseshoe Curve and Washington Union Station.
Mechanical & Purchasing Night – a New Format for Our January Meeting

Fairmont in Boston. The afternoon began with Bennett Levin’s hour-long presentation in one of the Copley’s meeting rooms. Members then retired to our traditional reception area to socialize and enjoy a selection of delicious hot and cold appetizers which left no one hungry. The timing of the meeting allowed many of the participants the option of going out to enjoy dinner and talk business at one of the many fine restaurants in Boston’s Back Bay.

While attendance was lower than past January meeting sizes, everyone who came was pleased with the new format, and many offered suggestions as to how we can improve it going forward. If you would like to offer your comments or add to the suggestions we have received, please contact us via e-mail. We look forward to hearing from you!

The New England Railroad Club board welcomes the following new members who were voted in at the Mechanical & Purchasing Night meeting: 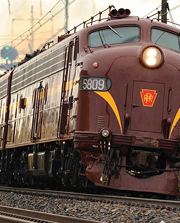 At the Executive Night meeting Club President Charles Hunter announced that the January meeting will be changing from the usual reception/dinner/speech format to a new format consisting of a late afternoon seminar followed by a reception with light appetizers. Attendees will then be able to gather with friends or business aquaintences in the Oak Bar or for dinner out at one of Boston’s many exceptional resturants. The new schedule of events will be:

Our honored guest and speaker at the meeting will be Bennett Levin, CEO of the Juniata Terminal Company of Philadelphia, Pennsylvania. A retired professional engineer and businessman, he has served on the FRA Railroad Safety Advisory Committee, and its Passenger Service Standards Committee. He is also a co-creator “Passenger Rail Today,” a PAC established with the sole objective of supporting candidates for federal office who have made the preservation and expansion of a national rail passenger system a priority. Mr. Levin’s company specializes in locomotive and railcar rebuilding and leasing.

Mr. Levin has gained national attention for his work in planning and operating the “Liberty Limited” a special train transporting wounded servicemen and women from Walter Reed Army Medical Center and Bethesda Naval Hospital to Philadephia for the Army/Navy game. Growing from an idea that he and his wife had in 2004, the train carries over 80 soliders and their guests in style and comfort using Juniata Terminal’s own equipment and private rail cars from around the country. Amtrak, Conrail, and other rail agencies as well as corporate donors also participate in the event. 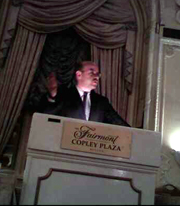 On only his fifth day in office, the new MassDOT Secretary and CEO Jeffrey Mullan joined the Club to offer some insight into the reorganized MassDOT and the effects it will have on both freight and passenger transportation in the state and the region. He spoke of the long-term vision of the Governor regarding the state’s transportation system, the new Board of Directors that will oversee the combined agencies, and the opportunities for regionalism he intends to promote. He emphasized the need for the new agency to operate as one, with all the accountability of a private business, while looking at the state’s transportation system from a customer’s perspective – both passenger and freight shipper.

Some of the rail-related investments highlighted in the speech that the State intends to move forward on are the MBTA’s Green Line extension to Medford, the commuter rail extension to New Bedford/Fall River, and a program to bring the T’s system into a state of good repair. Planning and funding for additional passenger and commuter service on Amtrak’s Inland Route and the Connecticut River Line (in partnership with ConnDOT) will also be undertaken as part of the agency’s focus on becoming a regional partner with other states.

A brief question and answer period followed the speech.