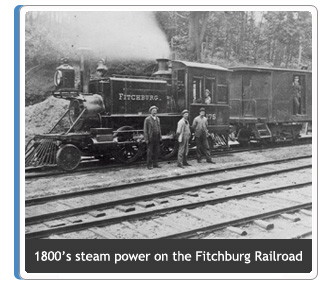 The New England Railroad Club was founded in 1883 by the officers of several of the region’s leading railroads for the purpose of sharing knowledge regarding operations, technology, and management, as well as to provide a forum for “socializing” (today’s equivalent of networking). The initial membership included executives from such storied railroads as the Boston & Maine, Boston & Albany, New York, New Haven & Hartford, Maine Central and Bangor & Aroostook. Club meetings were held in the Copley Plaza Hotel in Copley Square, Boston. Topics of the day included discussions about which coal burned cleaner in steam locomotives and the benefits of the then new “air brake systems”.

Since that first meeting the Club has grown and expanded in the century and a quarter of its existence. We have been a reflection of the change that is a constant in our industry. Old railroad names have been replaced with new ones, including CSX, Genesee & Wyoming, Vermont Rail System, Pan Am Railways, Central Maine & Quebec, and many others. The increased role of women and minorities in railroading is reflected in the diversity of our membership. And advancements in communication and travel have allowed the Club to reach beyond New England to address issues on a national level.

Today our membership hails from every railroad, both passenger, freight, and tourist, in the Northeast. We also have significant participation from suppliers, consultants, and elected officials both locally and nationally. The Club’s Officers and Executive Committee are elected from current members in good standing. In keeping with

tradition, only the employee of an active railroad may hold the position of Club President.

As we look to the future, the New England Railroad Club plans to continue to provide a forum for the discussion and promotion of all matters related to railroading. To help foster a dialogue between our members we’ve instituted different events including the annual Rail Tech Conference and the Scholarship golf outing in locations outside of Boston. We hope to continue to grow our membership through such events. At the same time we will not lose sight of rich history that brought us into existence and made us what we are today.